The great British staycation. What was once nae has recently and most affirmatively turned into yay where the question of holidaying at home is concerned. Indeed, in 2017, the number of Brits opting to holiday closer to home increased by almost a quarter compared to the previous year.

The rise of the staycation is down to a number of reasons, of course, but one key component is the current relative weakness of the pound against other currencies, giving UK businesses something to smile about in these tough, unpredictable times. With such a wide variety of scenic serenity sitting on our own doorstep, you’d be forgiven for wanting to take it all in as quickly and efficiently as possible. Well, that requires some serious attention to your transport. Here’s some help; our 5 IDEAL tips for travelling in the British countryside.

For such a small island with a supposedly solid, modern infrastructure, there’s a surprising amount that can go wrong when getting from A to B in Britain. Firstly, we have a train system in private hands and in thrall to profit which runs extremely unreliably, with British rail passengers losing 4 million (!) hours to delayed trains in 2018, the worst year since records began. And that’s before we mention buses, which seem to run on a random timetable at the mercy of the elements and the everyday, equally. Some of the zaniest, craziest excuses for transport disruption include ‘leaves on the line’ and ‘too much sunshine’. Oh, and if you’re driving in the British countryside, expect to be sharing narrow, winding roads with low speed limits and tractors. Yep, expect delays.

Just as you should expect delays, it’d also be prudent to expect the unexpected. Each tight turn on one of those aforementioned country roads could lead to a surprise. You’ll see all manner of seemingly quaint warnings; ducks crossing the road, sheep lying on it, and that’s before you consider the hilarious village names across the union (Boggy Bottom, we’re looking at you!). Basically, you’ll need your wits about you in more ways than one when driving in the British countryside; there’s plenty to take you by surprise, but there’s also a lot to tickle your funny bone.

We should preempt this with a disclaimer; internet coverage in the British countryside isn’t always up to scratch. You’ll often find yourself with little signal and scant bars though in residential areas, you’ll likely find a little more joy.

There are a number of apps you can download to make your travel easier. Taxi apps such as Uber only operate in the larger cities, but many more rural parts have area-specific cab ordering apps, like yougo taxis for the South West. These apps, in a similar way to the ubiquitous Uber, allow you to instantly book taxis online and then track when your driver will arrive.

The UK Bus Checker app is another prudent download, allowing you to check live updates of timetables and estimated arrivals and departures. The National Rail app serves the same purpose for Britain’s trains. Essential.

Though you could rely on standard buses – and a lot of luck – to be your transport when sightseeing here, it’s useful to note that most famous landmarks and must sees in Britain have their own bus services and dedicated stops which will take you to the metaphorical door. Corfe Castle, in Dorset, for instance, has the Purbeck Breezer, StoneHenge the Stone Henge Tour Bus from the city of Salisbury, and so on.

Whilst there are amenities in most rural villages in Britain, it’s worth packing a few essentials in your day bag to avoid being caught short in the middle of nowhere. We’d certainly recommend packing hayfever tablets; the pollen count can get pretty heavy in the British countryside. A rain jacket and sunhat are also vital, as the weather is unpredictable at the best of times. A map would also be wise, as that pesky 4G isn’t always going to be your most loyal travelling companion. 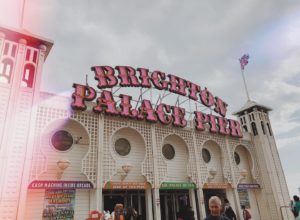