Where To Eat Near Tottenham Court Road: The Best Restaurants

With a shiny new stop on the Elizabeth Line cementing its status as a TFL headlining act, Tottenham Court Road is now the eminent focal point for those wanting easy access to Soho, Covent Garden and Fitzrovia.

But heavy is the head that wears the crown. Peckish passengers, starving shoppers and hungry day-trippers (yep, alliteration has failed us there) might just find that Tottenham Court Road station is a victim of its own success in terms of decent options of where to eat nearby.

Instead, leave the station blinking into the light, and you’ll be met with a string of Burger Kings, itsus, Le Pain Quotidiens and LEONs. At least if you’re after a big bag of American Candy with a side of tax fraud, you’ll be more than adequately served.

If you’re looking for where to eat near Tottenham Court Road, then you’ll find one of it just a three minute walk from the station.

Of course, you can veer off-piste and into the a la carte menu proper if you don’t want to be confined to the set menu. Start with the pork, rabbit and prune terrine – as good as it sounds – and follow with the restaurant’s sharing roast chicken with morels and vin jaune, which has already earnt iconic status with London’s culinary cognoscenti, and serves three generously for £70.

Combine those hearty, satisfying dishes with arguably the best wine list in the country, and Noble Rot Soho is without doubt one of the best restaurants close to Tottenham Court Road station.

If you’ve already eaten the length and breadth of Tottenham Court Road and are feeling somewhat uninspired, then perhaps the ever rotating cast of chefs and cuisines at Carousel will have you returning to dine in Central London again?

Each week, from Tuesday to Saturday, a new guest chef takes over the Carousel kitchen, with the restaurant introducing some of the brightest young talents from across the world to the hungry punters of Charlotte Street.

For those wishing to try as wide a variety of cuisines and chef’s styles as possible, Carousel is a great option.

Speaking of trying as much as you can manage all under one roof, it’s been pretty impossible to miss the buzz surrounding the JKS-backed Arcade Food Hall since its opening in April of this year.

That Southern Thai restaurant is Plaza Khao Gaeng, which, despite only being two months old, is already doing some of the most faithfully composed, fiery food from The Kingdom anywhere in London.

Though much has been written about the fearsome chilli levels on display here, it’s the vivacity of the ingredients that really shine through. The coconut cream in the massaman and chicken curries tastes freshly pressed (a labour intensive process that’s rare to find in the capital), the sour curry sparkles with garcinia fruit as opposed to just lime and tamarind, the khua kling’s green peppercorns bring rasping heat alongside the undulating presence of various fresh and dried chillies. It’s magic. Our only complaint? More elbow room on the tables, please!

Speaking of finding room, if you’ve somehow managed to save stomach space for seconds, then on the floor below there’s sushi, smash burgers, shawarma and more.

Post-office diners beware; no starched white shirt is safe from the enthusiastic slurping of soup and noodle that Laksamania encourages. Or rather, that Laksamania demands…

Offering one of the best value quick meals in Central London, there’s a decent selection of laksa here, none of which top the £15 mark and all of which are a generous size for a pit-stop and a re-fuel near Tottenham Court Road.

Here, the soup is simmered for 8 hours or so, resulting in a decent level of complexity difficult to find in this part of London (though, a little further afield, both Normah’s and Bugis Street Brasserie do an arguably superior version).

Our go-to order? The Melaka curry laksa, which in the Nyonya tradition delivers a hot and sour one-two punch, the former asserted by the addition of sambal. A carefully positioned napkin (or bring-your-own bib) is pretty much essential, here.

If you’re wondering where to eat close to Tottenham Court Road Station, then a simple five minute stroll will deposit you on Rathbone Place and at Lima, a restaurant doing punchy Peruvian plates without too much fuss or frippery.

Check out our full review of Lima here.

You’d be hard pressed to find a decent steak for under £30 in the centre of London. Which is what makes Flat Iron (a two minute walk from Tottenham Court Road Station) all the more remarkable; a properly good product, slowly reared and generously marbled, cooked to perfection, for just £12.

Yep, you read that right; £12. You’d pay similar for a smoothie along Oxford Street.

It’s the simplicity of the proposition here that’s so appealing; there’s only one steak (though there are a couple of specials) on the menu – ‘The Flat Iron’ – alongside chips, green salad, and a selection of sauces. There’s no danger of getting gripped by the paradox of choice, which in the hustle and bustle of Central London, is very welcome indeed.

And get this; a bottle of rustic but drinkable Italian Negroamaro is £22. You could say that their motto ‘’great steak for everyone’’ might even sell Flat Iron short!

Michelin-starred dining doesn’t come more laid-back than at The Ninth, just a few minutes’ walk from Tottenham Court Road. That’s not to say the Mediterranean-inspired plates aren’t worthy of a star; chef Jun Tanaka’s cooking is as poised and precise as you like, with the restaurant’s rabbit lasagna earning cult status soon after opening in 2016.

If it’s on, order it, as the chefs at The Ninth have a wicked way with pasta. If not, anything from that section of the menu is guaranteed to wow you. Save room for the restaurant’s signature pain perdu, and you’re going to leave satisfied. You’ll also be grateful that Tottenham Court Road Station is on hand to whisk you home.

Do the visually arresting Taiwanese street food purveyors at BAO even need an introduction anymore? All we’ll say is that BAO Fitzrovia is one of the best places to eat near Tottenham Court Road, which is what you came here to find out, right?

Read: Where to eat the best bao buns in London

We end, conversely, with perhaps our favourite place to eat breakfast in the whole of London, and certainly the best breakfast close to Tottenham Court Road; at Koya.

Opening at 10am, seven days a week, the restaurant specialises in udon noodle and rice dishes, with austere menu descriptions belying the masterful preparation and technique involved in these nourishing dishes. This is soul food, make no mistake, and ideal for kicking off a day’s shopping along Oxford Street.

The must-order for breakfast? It’s got to be Koya’s version of kedgeree, which is simply divine. Or, how about the divinely simple kama tama; udon noodles with egg, soy sauce and spring onion? That will set you up for whatever the day brings. 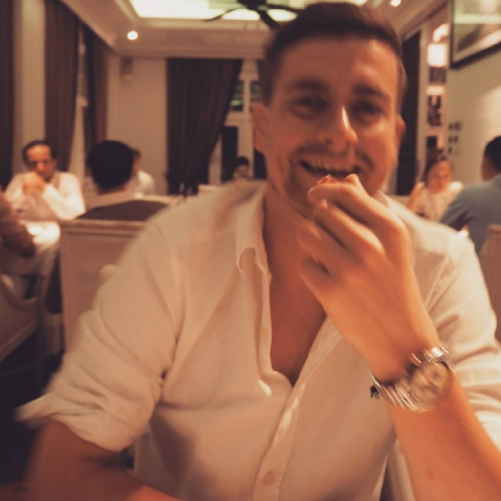 Joseph Gann
Chef and food writer, with an interest in mental health and mindfulness
#IDEALEDITORS PICKSIDEAL FOOD AND DRINK