Though agriculture is a vital part of the UK economy, contributing around £24 billion in revenue annually, the sector has certainly not had an easy time of late. A seemingly never-ending onslaught of trouble and strife has damaged the sector over the years, from food scares to environmental changes, Brexit to big-name megafarms. Farmers are finding more and more that they are being forced to change and adapt, but are these changes coming too quickly to be implemented effectively and reduce the potential damage? With the industry under threat, it’s vital the consumer does their bit, too. Here’s how; our 5 IDEAL ways to support agriculture in Britain.

The farming industry is no stranger to food scares and the impact they can have on their market. Consider the mad cow disease outbreak that lead to the EU banning British beef exports in 1996. Or, how a single claim on the Oprah Winfrey show, of how USA-produced meat could cause bovine spongiform encephalopathy, led to a drop in beef prices without a single confirmed case in states at the time.

While this has led to the positive effect of a more transparent supply chain and people taking more of an interest in where their food comes from, it’s vital that you keep educated (and suspicious) of sudden fads and food scares. In short, don’t overreact with your shopping habits until scientific evidence has done its thing.

According to the BBC, carbon’s degradation of soil will halt any attempt to prevent climate change. Poor farming and deforestation releases carbon trapped in soil, which in turn contributes to the already dangerous levels in our atmosphere. With the soil harmed, plants can’t grow to soak up carbon from the atmosphere, so the problem is in effect two-fold.

Experts state that 75 billion tonnes of fertile soil is lost every year due to degradation, and poor or outdated farming techniques, such as overusing pesticides, are partly to blame. This is pushing a rewilding movement, with the belief that the best way to protect soil would be to allow forests to return. This of course, would impact the amount of land farmers have access to to grow their crops and graze their cattle. There are many within the industry who say that they could continue to farm and protect the soil by changing their methods.

One change in farming methods that can help protect soil is by ditching ploughs and instead relying on natural methods such as nutrients from compost and crop cover to help rejuvenate the soil. The Guardian recently reported how farmers are fighting to save their soil after reports showed the UK is only decades away from having critically low soil fertility — and the stark warning that we simply cannot survive without good soil. It’s essential, then, to vote with your wallet on this one, buying from those producers committed to protecting the ground.

Big companies are taking over agriculture. And that spells bad news for farmers, producers, the product itself and consumers. The Conversation outlined that England 15 years ago was home to nine times as many small farms as in 2018; a huge reduction, make no mistake. The rather-ominous sounding ‘megafarms’ have taken over the British countryside, and considering the damage smaller farmers are trying to help tackle, it’s certainly no good thing.

Megafarms are touted as being particularly problematic for the environment, with polluted waterways and damaged rivers linked to these supersized industrial farms. With many farmers predicted to leave the industry as paid-by-area government subsidiaries cease, as well as the continued struggles with simply turning a profit from the food they are growing, wealthy business owners are snapping up the land left behind. Did you know, for example, that inventor James Dyson is one of the most prominent landowners in farming? In short, he shouldn’t be. 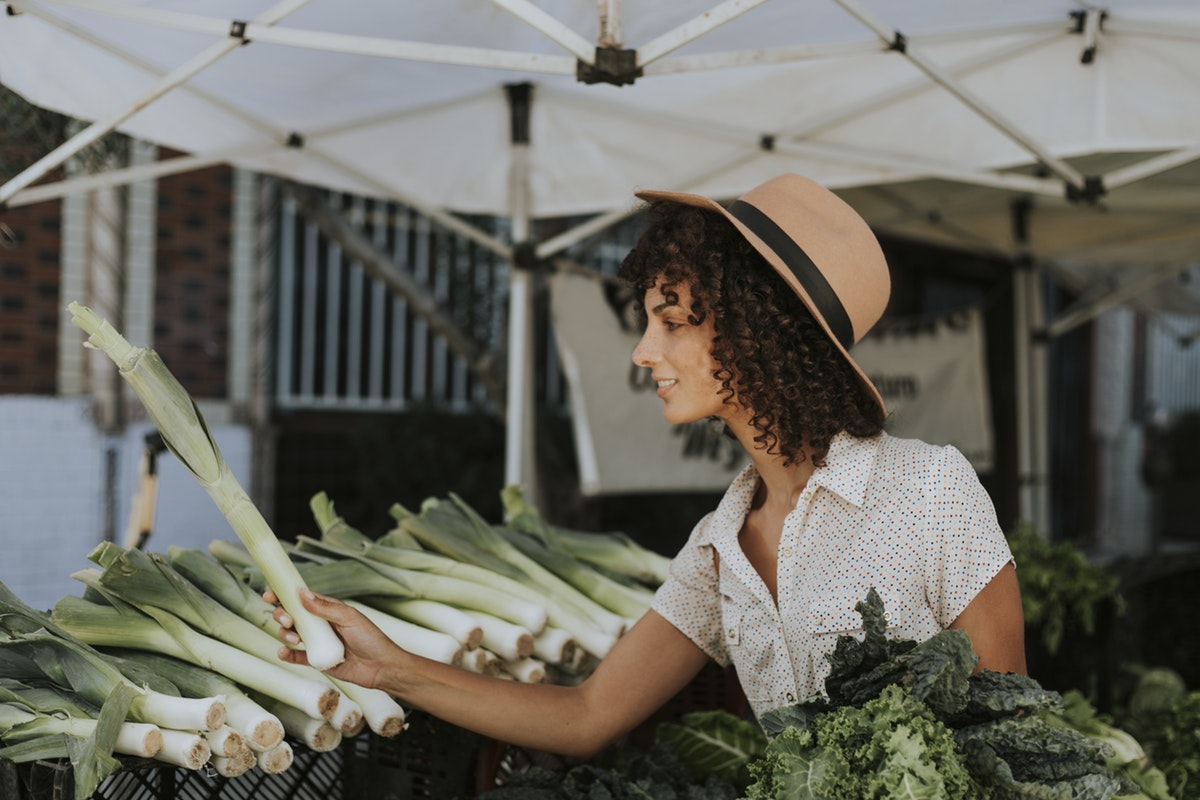 Buy independently, from a local butcher if you can, so your meat, fruit and vegetable’s provenance is easier to trace. These guys care deeply about their product, not just the coin it’ll make. You’ll be supporting a local business too, not some multi-conglomerate who couldn’t care less about your stomach’s welfare, let alone an animals’; a no brainer, really. Avoiding supermarkets also helps you avoid vacuum packed, plastic wrapped meat (meat sweats? no thankyou) and fresh produce which has travelled a long way and has been damaged – and has damaged the environment – in the process.

There is seemingly no area that Brexit won’t influence, and the decline of farming in the UK is no exception. Despite the flummoxing exit from the European Union stretching on and on, it’s already affecting agricultural processes. Without the support of workers from the EU, farms have had no choice but to let thousands of pounds worth of produce rotting in the fields. This, on top of the already difficult nature of making a living from crops and livestock, is certainly a problem the industry could have done without.

Beyond this, the changes Brexit could have on the export of British meat could be catastrophic. For example, Welsh lamb exports 40 per cent of its lamb outside of the UK, with 90 per cent of that yield heading to the EU. Though you would be hard pressed to find a sector that isn’t struggling with issues such as the environment or politics, finding one as deeply throttled by it as agriculture could indeed be difficult. Do your bit, buy local, boycott the bully boys and support those with a regenerative approach to agriculture.

5 IDEAL THINGS TO DO IN SWANAGE, DORSET

IDEAL TRAVEL GUIDE: HOW TO EAT LIKE A LOCAL IN TUSCANY

6 OF THE BEST TAKEAWAY NEAPOLITAN PIZZAS IN SOUTH LONDON

5 WAYS TO HELP YOU GET BACK INTO READING TODAY

HOW TO FIND THE IDEAL PEST CONTROL PROVIDER FOR YOUR HOME

9 PLACES TO EXPLORE THE CULTURE & HERITAGE OF ISTANBUL, TURKEY

Istanbul is a city rich in diverse culture and history. Straddling Europe and Asia, and enjoying a...
IDEAL DESTINATIONS

5 IDEAL THINGS TO DO IN GREATER PALM SPRINGS, CALIFORNIA, FOR...

The resort city of Palm Springs and its neighbouring eight cities which make up Greater Palm Springs...
IDEAL DESTINATIONS

5 IDEAL THINGS TO DO IN SWANAGE, DORSET

Dorset was recently ranked as England’s most beloved county (alongside Devon), and the...
IDEAL DESTINATIONS

Ideal for those seeking a holiday off the beaten track. Britain’s holiday destinations have...
IDEAL DESTINATIONS

IDEAL TRAVEL GUIDE: HOW TO EAT LIKE A LOCAL IN TUSCANY

For holidaymakers who love to base their adventures around food and wine, Italy is one of the...
IDEAL DESTINATIONS

6 IDEAL THINGS TO DO IN TRINIDAD, CUBA

So, you’re penning your itinerary for that once-in-a-lifetime trip to Cuba? Old Havana is obviously your first...
IDEAL DESTINATIONS

AN ALTERNATIVE WEEKEND IN LONDON FOR SUMMER 2020

Ideal for those looking to dodge the crowds and cliches during their visit to the capital.
IDEAL TRAVEL GUIDES

5 OF THE BEST BEACHES IN ZAKYNTHOS, GREECE

The Greek island of Zakynthos, sitting off the country’s south west coast, is one of the jewels...
IDEAL DESTINATIONS

Ideal for those wanting to experience the French luxe-life without the crowds. According to...
IDEAL DESTINATIONS

5 OF THE BEST LUXURY RURAL HOLIDAY RENTALS IN THE...

Ideal for escaping the crowds and heading to your own safe haven this summer staycation.

5 IDEAL HACKS TO HELP MUMS FIND THE TIME TO WORKOUT

6 IDEAS FOR HAVING FUN WITH FRIENDS AT HOME DURING THE...

HOW TO FEEL MORE ENERGISED IN THE MORNING: 7 IDEAL HACKS

THE DO’S AND DONT’S OF DIY NAILS

5 IDEAL PRODUCTS TO ADD TO YOUR SKINCARE ROUTINE THIS SUMMER

5 OF THE BEST THINGS TO DO IN NASSAU PARADISE ISLAND,...