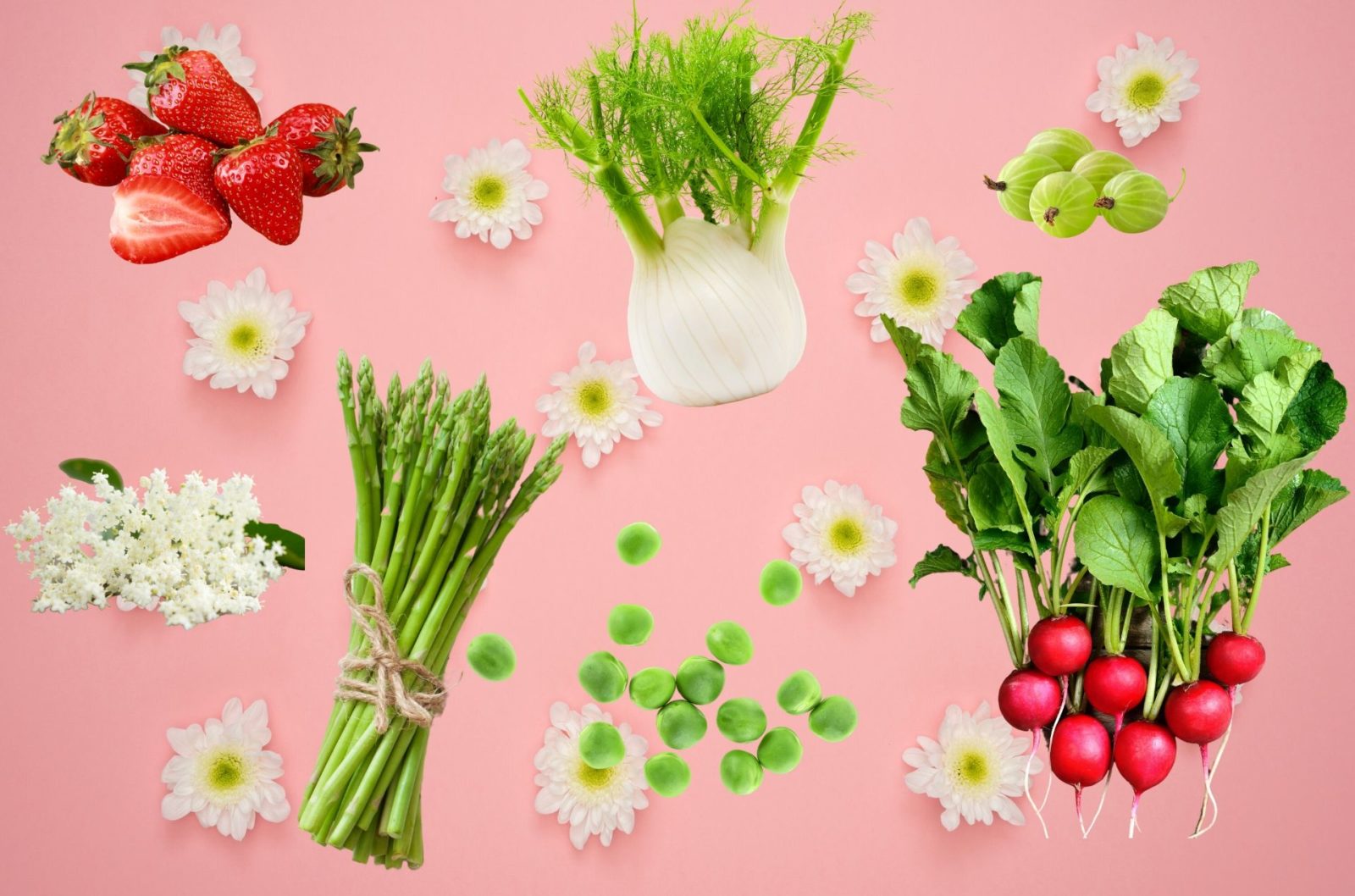 And some great ideas on cooking them!

With so many stuck indoors struggling to know what day it is, let alone the month, recognising the passing of time is perhaps most succinctly realised by what’s fresh and abundant right now.

For many, June is the finest time for seasonal British produce, with some of our most beloved fruit and veg at the very of their peak of their powers. No wonder there are so many strawberries at Wimbledon. Or, erm, elderflower foraged at Glastonbury. That is a thing, right?

Anyway, here’s our pick of what’s in season; these 7 of the best fruit and vegetables in June, and some ideas on cooking them, too, for good measure.

This most beloved of British vegetable is coming to the end of its short-lived but illustrious season. One final mention, then, for the special, speared soul. Take a bow asparagus!

In terms of cooking it, asparagus is only around for a very short while, and takes two years of careful cultivation to grow, so show it some respect. We’d recommend ignoring the conventional wisdom that ‘snapping’ the stalk will somehow – automatically and every time – indicate the correct place where woody becomes palatable. It wastes a lot of the good stuff, the stuff we’ve waited almost a year to eat. So, simply cut an inch or so from the bottom of the stalk and then gently peel the lower end until you have dispensed with the stringy parts and reached the tender interior.

We like to retain the fresh snap present in asparagus’ raw form, as well as its splendid green colour, so a quick blanch of a minute or two in a rolling boil of salted water should do the trick. You could enjoy immediately at this stage, or a quick griddle to add a smoky note and pleasing char marks works wonders, too. Parmesan and poached eggs are a wonderful accompaniment, as is anything fishy.

Though the debate rages on regarding whether frozen peas are actually better (for you and tasting) since their very essence is preserved – see: frozen – the moment that they’re plucked from their pods, right now we’re all over the fresh kind.

Peas in June have an incomparable freshness, sweetness and bite which makes them impossible to resist raw. If you’re taking on the task of podding a bowlful for cooking with later, don’t expect many to actually make it to your dish or the dinner table.

Should you be able to resist, keep it as simple as you can by cooking some down with thinly sliced spring onions, butter and olive oil, perhaps loosened with some chicken stock, as a side to late Spring lamb or delicately poached fillet of skinless hake or pollock. A similar preparation goes beautifully with spaghetti; top with parma ham or prosciutto for added luxury.

A salad of quickly blanched peas, broad beans (also approaching their peak now) mint and ricotta also lets these little beads of beauty shine. Or, just pod them and pop them in your mouth raw, and make approving Nigel Slater like noises.

Fennel divides the crowd somewhat, with as many haters as there are lovers, but we fall firmly in the latter family and we’re not afraid to sing it from the rooftops.

Fennel’s aniseed freshness and crisp texture makes it ideal for salads which need lending some bite and poise; simply slice thinly on a mandolin (watch those fingers!) and sit in some ice cold water for a few minutes to really allow the fennel to crisp. Mix your slices with rocket and dress with an emulsion of rapeseed oil and lime, then serve with grilled red mullet, skin blistered, for a gorgeous summer lunch. Oh, and don’t throw out the fennel fronds; simply pick and use as a garnish for added complexity.

Fennel really comes alive when it’s cooked, changing character and becoming caramelised and giving. Heat up a pan (ideally a griddle). Quarter a fennel bulb, toss lightly in olive oil, a pinch of sugar and salt, then brown on the two exposed sides, adding a knob of butter halfway through the process to bring richness. Cover with stock and orange zest (fennel just loves citrus), bring to the boil then lower the temperature and braise on a low heat until tender, which should take around 20 minutes. Delicious as a dish on its own, with pasta or bread, or as an accompaniment to fish, chicken or pork.

Peppery, grassy, crunchy; radish is on song right now. Not only fit for bringing vitality to your Instagram posts with its instantly recognisable pink and white (perhaps that’s what Frank Ocean was singing about), radish also tastes great, too.

When enjoyed raw (after a quick wash, of course) they are positively spicy, so slice super thinly if they’re to adorn a salad. Cooking brings out a little of their sweetness and tames their kick while pickling creates a sweet and sour interplay which works so well with radishes’ crunch. This treatment, if using red wine vinegar, intensifies their colour to a vivid pink; perfect if aesthetic considerations are in mind.

But best of all, in our humble opinion, is raw radish dipped in softened, salty as butter or an anchovy heavy mayonnaise. We’re getting all Pavlov now just thinking about it.

Pass us a tissue.

A forager’s favourite, elderflower appears in the UK in hedges and alongside roadside hedgerows between mid May and early June, and its scent is just so evocative of lazy, hazy summer days. If you are going out foraging, please do follow responsible foraging guidelines and never over pick. Remember those toilet paper hoarders from a couple of months back? Don’t be like them.

When picking, prioritise warm, dry days and areas away from traffic exhaust fumes. We’ll defer to the experts here on how to identify elderflower; check out Countryfile’s guide. But once you do have a decent, responsible haul, freshly made cordial is just lovely. The floral aroma of elderflower also lends itself to cold, creamy desserts like parfait and pannacotta. Check out a selection of sweet elderflower recipes on Great British Chefs to really tantalise your tastebuds.

I mean, what more do we need to say except fresh British strawberries in summer are one of life’s great pleasures? We do need to say more, though, or the editor will get mad…

They’re simply so perfect that there really is no better way to enjoy a strawberry than fresh, perhaps topped with some lightly whipped cream, and if you’re going all fancy, a couple of basil leaves.

Doing things rather in reverse here, strawberries can also be used in savoury dishes to great effect. When paired with burrata, freshly podded peas and dash of extra virgin olive oil, you have yourself one of summer’s greatest starters. You can thank us later!

Not only the preserve of, erm, preserves, British gooseberries in summer are hugely versatile, working in both the savoury and sweet setting brilliantly. Make the most of their shortlived season (from June to July) by enjoying them in your starter, main and dessert this month.

A classic pairing using the best of British produce is mackerel and gooseberry, the latter cutting through the oiliness of the former expertly. You’ll have to temper their tartness somewhat, by sweet pickling or cooking down with sugar and vinegar, but once you’ve achieved that balance between sour and sweet, your gooseberry jam or sauce is a brilliant bedfellow for not only the aforementioned oily fish, but pan seared duck breast, too.

For dessert, time and time again we turn to Nathan Outlaw’s gooseberry custard tart with ginger sorbet. You should too.

4 ESSENTIAL TYPES OF FLOUR IDEAL FOR YOUR LOCKDOWN LARDER

8 IDEAL TIPS FOR MAKING YOUR OWN ALLOTMENT AT HOME

HOW TO MAKE THE IDEAL THREE INGREDIENT ESPRESSO MARTINI

10 UNUSUAL INGREDIENTS TO ADD TO YOUR MORNING COFFEE

With few facets of our lives left unchanged by the unparalleled impact of the Coronavirus pandemic, it’s...
IDEAL DESTINATIONS

5 OF THE BEST PLACES TO VISIT IN PORT OF SPAIN,...

If you’re in the process of planning a trip to Trinidad and Tobago, the most southerly Caribbean...
IDEAL DESTINATIONS

‘Pictures or it didn’t happen’. Though such a statement shows just how...
IDEAL DESTINATIONS

Nicknamed the Silver State and with an ostentatious, outrageous Sin City as its most populous urban centre,...
IDEAL DESTINATIONS

6 IDEAL THINGS TO DO IN NORTH IBIZA

Mention you’re off to the island of Ibiza for a holiday and assumptions of wild nights which...
IDEAL DESTINATIONS

The nation is in a state of limbo. Between locked down and set free, between returning to...
FEATURED

SICILIAN TRAVEL TIPS: 5 IDEAL THINGS TO DO IN PALERMO

If you’re seeking a city break with a difference, to bring some colour...
FEATURED

THE JOY OF ANTICIPATION: 6 THINGS TO LOOK FORWARD TO RIGHT...

6 WINTER SKINCARE MISTAKES YOU COULD BE MAKING

7 OF THE WORST WORKING FROM HOME DISTRACTIONS

WHY YOU SHOULD MAKE SLEEP A PRIORITY & THE IDEAL WAYS...

5 TIPS FOR EXERCISING OUTDOORS THIS WINTER

5 WAYS TO HAVE A BETTER PERIOD

7 IDEAL TIPS ON MANAGING YOUR WORK-LIFE BALANCE DURING CORONAVIRUS

6 MENTALLY STIMULATING THINGS TO DO AT HOME DURING LOCKDOWN

4 STEPS TO LOSING THE LOCKDOWN LOAD

5 WAYS TO EXERCISE DURING THE CURRENT LOCKDOWN

7 WAYS TO ADD A TOUCH OF SEASONALITY TO YOUR DECOR