Well, you can’t accuse Sri Lanka of resting on its laurels. Already declared the ‘pearl of the Indian Ocean’, already the host of 2.1 million tourists a year, and just recently named as Lonely Planet’s top country for travel in 2019, you wouldn’t blame the country for wanting to take it easy for a while. But no, the government have announced that they’re aiming to double the number of tourists to five million by 2020 as part of its development strategy. As such, expect to see friend’s and family’s’ insta feeds alive with gorgeous photos of golden sand and tropical rainforests this year and the next.

With such increased popularity comes increased prices, but the good news is that the country can still be enjoyed on a remarkably slimline budget. With that in mind, here are 7 IDEAL tips for seeing Sri Lanka on a shoestring budget.

Sure, it goes without saying that you should always be diligent about searching for flight bargains, but it seems that flying to Sri Lanka is uniquely erratic in just how variable the price can be. If you were, for instance, to book a flight out from London to the capital Colombo last minute (in this case 9 days prior to departure) you could at the time of writing get there for just £141. Wow. The same flight in August, even though it’s considered low season, can easily come in at triple that. It’s imperative, then, to be smart about planning your trip. We’ve written more about bagging cheap flights here; check it out now, thank us later.

Accommodation in Sri Lanka is where things get expensive, relatively speaking and compared to other Asian countries. This is mainly down to the huge VAT tax meaning hosts and hotels have to charge a lot to turn a profit. Fortunately, homestays are plentiful and much more affordable. Sri Lankans are ridiculously warm, hospitable people meaning it’s a brilliant way to experience the life of a local, particularly in terms of food.

TAKE THE TRAIN IF YOU HAVE TIME

Trains are really cheap, but erratic in their scheduling. You have to weigh up, then, how much you value your time over your money. If you do decide the take the train, it’s a rewarding experience, with breathtaking views of tea plantations, mountains, jungles and beaches making it well worth the wait. The journey from Colombo to Kandy, in particular, is a stunner.

If you’re wanting to go even cheaper, then it’s wise to book your tickets in advance. One thing to note is that this is only really doable, as with buses, if you’re travelling light. Both get packed out and suitcases just aren’t the done thing.

Within the cities, tuk tuks and taxis are reasonable, but the usual rules apply about requesting your trip be metered or agreeing on a price before travel. Hailing one outside a tourist attraction will be substantially more expensive, simply walk a little way down the road and feel smug about the cheaper price. 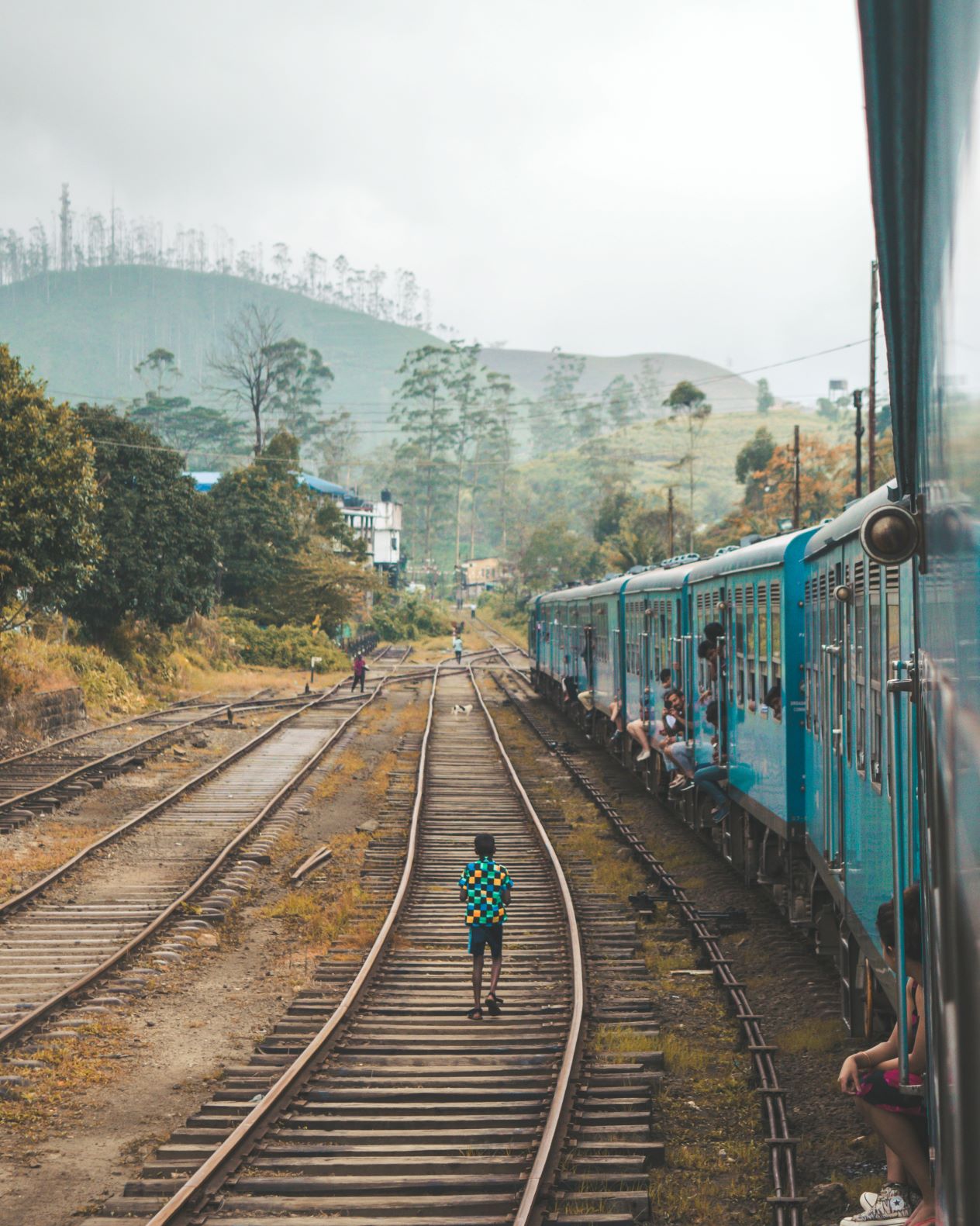 The low season here falls between May and September. The prevalence of daily monsoons rises in tandem. Though the chances of getting wet are higher, the weather is still warm and the rain doesn’t last long. Of course, you’ll find also find accommodation significantly cheaper during this time. Be warned that each region has divergences in when’s hottest, coolest and wettest, as well as a varying prolificacy for storms. Fortunately, there are a number of tour companies that can help plan your trip to Sri Lanka who can give you the lowdown on low season.

Though officially a Theravadan Buddhist country, Sri Lanka is home to three other prominent religions, with Hinduism, Islam and Christianity all significantly represented. This makes for a diverse, vibrant range of national holidays and festivals being observed, with two or three major events taking place a month. Lunar New Year, celebrated in mid-April, sees the whole island in perpetual celebration for two or three days; firecrackers, feasting and fun are the name of the game. Vesak Poya, the Buddhist Full Moon festival in May, is a huge deal in Colombo and Kandy especially, with the dazzling spectacle of lanterns and light a must see. The list goes on. What’s important to note is that during the time of any festival, travel is more expensive and even more erratic than usual. Best to stay put, and enjoy yourself instead.

We wouldn’t blame you thinking that rice and curry was the only dish on offer out and about; it’s available everywhere and comes in portions so massive it’s impossible to avoid. Welcome, but it gets a little repetitive. In terms of budget though, it’s a winner; filling, nourishing and dirt cheap. It’d be a mistake to dine on rice’n’curry alone on your trip, though, as Sri Lanka has so much other great food to offer if you make a little effort to scratch the surface. We’ve written more about it here.

GET A LOCAL SIM CARD

Local sim cards with decent 4G deals are cheap and by using one you’ll avoid huge roaming charges from your U.K provider. It’s certainly cheaper than buying coffee every time you get lost to access cafe wifi. A pre-paid, locked and loaded SIM on arrival at Colombo’s Bandaranaike International airport shouldn’t cost more than a fiver. For that, you’ll get 3 GB of data, 12 hours or more of wifi access and unlimited calling credit within the country. Mobitel and Dialog are generally considered the best networks for coverage.

5 OF THE BEST LUXURY RURAL HOLIDAY RENTALS IN THE UK

5 OF THE BEST SKI RESORTS IN FRANCE FOR WINTER 2020

FROM PASTEL DE NATA TO BIFANA: WHAT TO EAT IN LISBON, PORTUGAL

4 MUST SEE PLACES ON YOUR TOUR OF NAMIBIA, SOUTHWEST AFRICA

5 OF THE BEST SKI RESORTS IN FRANCE FOR WINTER 2020

France's summer ski resorts have now been re-open (as of June 6th) for nearly a month and...
IDEAL DESTINATIONS

Ideal for a vineyard tour down under. The embodiment of ‘New World’ wine in...
IDEAL DESTINATIONS

4 MUST SEE PLACES ON YOUR TOUR OF NAMIBIA, SOUTHWEST AFRICA

If you’re planning an African safari in the not-too-distant future then we’re sure...
IDEAL DESTINATIONS

Ideal for those looking to settle in seamlessly. So, you’re moving to the City...
IDEAL DESTINATIONS

4 OF THE BEST DEEP BLUE SEA DIVING SITES IN THE...

Sure, paddling is great. Yep, a few yards of front crawl before retreating...
IDEAL DESTINATIONS

5 IDEAL THINGS TO DO IN HONG KONG WITH KIDS

Hong Kong is one of the busiest metropolia in the world, defined by towering skyscrapers that mingle...
IDEAL DESTINATIONS

Not yet! Not. Yet. The drawbridge is still up, the lock still down, and the notion of...
FEATURED

7 IDEAL DESTINATIONS WE CAN’T WAIT TO VISIT ONCE THIS THING’S...

Because we all need something to look forward to during this tough time, right? A little escapism...
IDEAL DESTINATIONS

Though government advice is vague and open to interpretation at this point, with the suggestion recently that...
IDEAL DESTINATIONS

The Mekong River is one of the world’s great bodies of water. Stretching for over 4000km and...

5 IDEAL PRODUCTS TO ADD TO YOUR SKINCARE ROUTINE THIS SUMMER

8 IDEAL TIPS FOR STAYING HEALTHY THIS SUMMER FROM JOE WICKS

5 IDEAL WAYS TO INCORPORATE CBD OIL INTO YOUR BEAUTY ROUTINE

4 NATURAL WAYS TO MANAGE PAIN AS PART OF A HOLISTIC...

HOW TO KEEP YOUR HOUSEPLANTS ALIVE FOR LONGER: 7 SIMPLE STEPS