Our national identity is in a bit of a state right now. The debate is partisan, the arguments binary, and the state of hate, mistrust and misinformation perpetual. Parliament is failing, pollution is rising and the urban tableau is turning increasingly ugly. A spot of escapism deep into the U.K’s proud and majestic countryside might restore a bit of faith, we think. What that in mind, here are 5 IDEAL activities to enjoy in the Great British outdoors this Spring.p

Although there’s actually not much semantic difference between a hike and ramble, we’ve chosen the latter as it evokes a certain aimless, gentle wander which we think fits the escapist bill just perfectly. In the fine words of Countryfile presenter Julia Bradbury, ‘’walking is one of Britain’s best loved pastimes. Every month, up to nine million folk pull on their boots and head to the great outdoors’’. That’s a lot of people trying to clear their heads!

Several trails in the Lake District made up a recent Top 10 of Britain’s Favourite Walks, meaning Cumbria should be your first port of call if you’re serious about your rambling. If you’re focused in the South, we adore the walking options in the Swanage and Purbeck region of Dorset; the Priest’s Way walk from Swanage to Worth Matravers, taking in the Jurassic Coast’s unbeatable views and cracking Square & Compass pub, is perhaps one of the best rambles in the U.K.

That sense of freedom you’re craving, with the wind in your hair and fresh air in your lungs, could be satisfied with a horse riding holiday. The U.K seems to have an affinity with all things equestrian, and the relatively flat, gentle terrain combined with milder temperatures of Spring make the here and now the perfect occasion to mount.

Wales, and the Brecon Beacons, in particular, boasts some of the best opportunities for horse-based holidays, partly owing to a network of bridleways meaning you can steer well clear of any busy roads. Great stuff. There are three dedicated centres offering bespoke, tailor-made trips, so whether you’re after a gallop or trot, you’ll be covered.

Although basic equipment is usually provided, there are online shops which provide more detailed, wide ranging supplies for enthusiasts from shoes to blankets. However, bear in mind that equestrian supplies can be quite expensive so look for discounted prices as part of equestrian clearance sales if you’re up for a bargain.

What better way to celebrate the Great British outdoors than by making the most of the terroir? Spring sees the first shoots of some delicious locally sourced vegetables, and if you’re a fan of the farm-to-table ethos, then it’s high time you tried your hand at planting, growing, tending to and ultimately eating some of the great crops local to our land.

Particularly good right now are celeriac, Jerusalem artichoke, leeks and swede, with asparagus season just around the corner, too. In terms of sowing seeds, March is the perfect time to get your strawberry plants into the soil. Also ripe for planting right now are onion, shallot and garlic sets, as well as broad beans, parsnips, beetroot, lettuce and more.

CANAL CRUISING ON THE AVON RING

What better way to embrace the slow-paced, low living lifestyle we’re all longing for than via exploration of the U.K’s waterways. There’s our island’s rich history to appreciate here, a glimpse into an easier way of life we’re all secretly courting, as well as little in the way of interruption. Bliss.

The Avon Ring is perhaps the best canal boat trip out there, as it takes in some pretty, quaint countryside and a host of famous historical sites. Connecting the outskirts of Southern Birmingham to Stratford-upon-Avon and Tewkesbury, through the serene, stunning Cotswolds, you’ll take in Shakespeare’s place of birth and Tewkesbury Abbey, amongst others. The real please of such a trip, though, lies in the laid back, go with the flow mentality of conquering 100 miles of canal at a canter, where all that matters is negotiating the near 130 locks and soaking it all in. 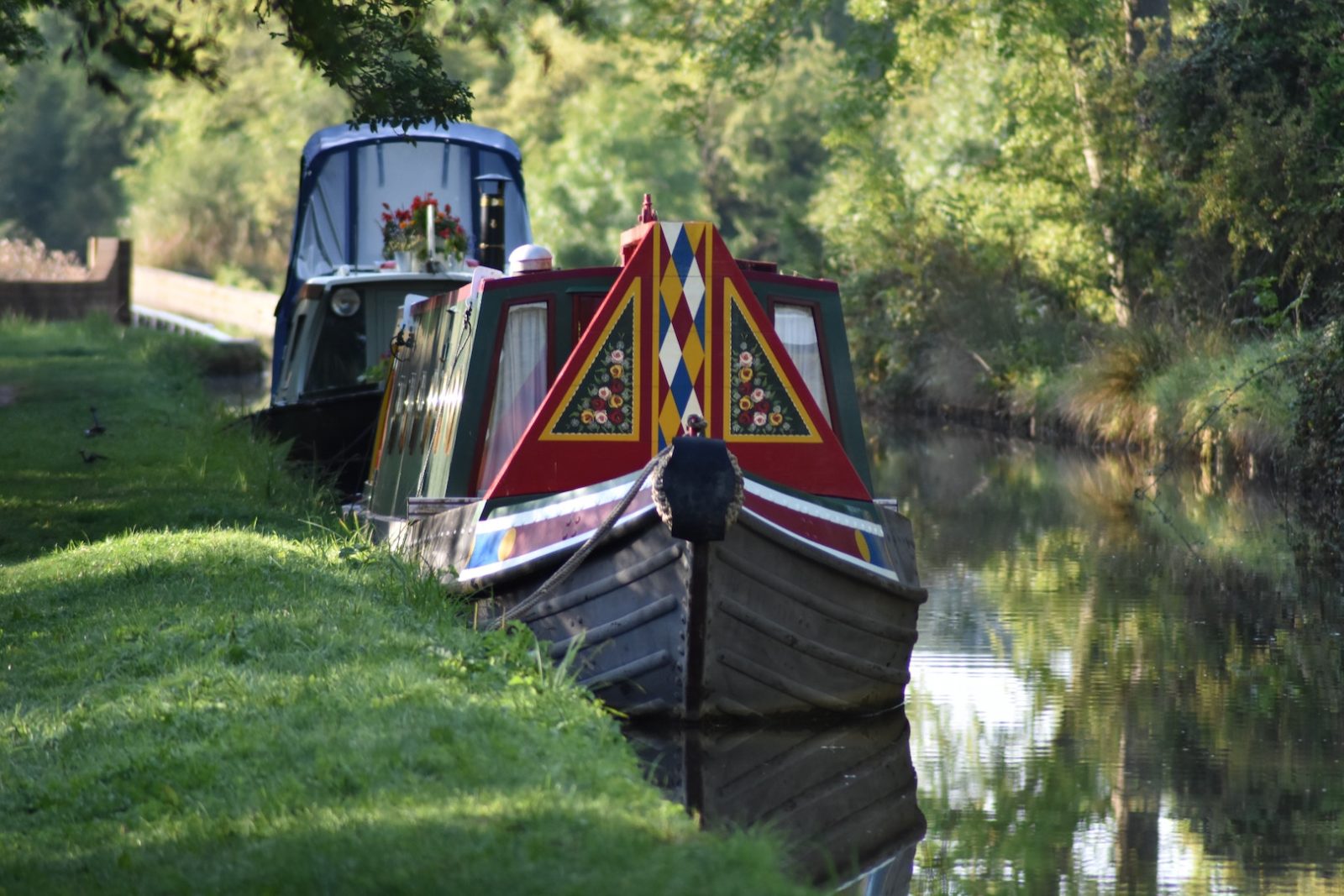 If you’re tired of the watching the endless Question Time debates about Brexit and the predictable Premier League, then why not feast your peepers on something a bit more natural for a change? Britain is home to 15 birds of prey species as well as penguins, puffins and the rare cattle egret, to name but a few, making bird watching a really rewarding hobby to take up.

Northern, remote Scotland, particularly the collection of islands known as the Outer Hebrides, is perhaps the premier place to spy feathered flights of fancy. At the North Harris Eagle Observatory on the Isle of Lewis you can see the most majestic of them all, the golden eagle (don’t @me, peregrine falcon). A whole host of seabirds are also seen all over the Western Isles, with the U.K’s biggest colony of puffins and the world’s largest collection of guillemots calling the World Heritage Site of St. Kilda their home. Go visit!

6 WAYS TO TAKE CONTROL OF YOUR HEALTH

5 TIPS FOR SLEEPING BETTER DURING DURING UNCERTAIN TIMES

HOW TO HANDLE BACK TO WORK ANXIETY: 5 IDEAL STEPS

5 WAYS TO FRAME YOUR FACE WITHOUT WEARING MAKEUP

DON’T LET THE SHORTER DAYS MAKE YOU SAD: 5 WAYS TO BRIGHTEN YOUR HOME

WEDDING PLANNING 101: IDEAL ELEMENTS IN THE RUN UP TO YOUR BIG DAY

Ideal for day out and about with the family. Vancouver, Canada’s third largest city,...
IDEAL DESTINATIONS

So it looks like we’re stuck on this island of ours a little longer, with air travel...
IDEAL DESTINATIONS

The Southeast Asian country of Thailand is well known for its lush forests and beautiful, crystal clear...
IDEAL DESTINATIONS

Ideal for a vineyard tour down under. The embodiment of ‘New World’ wine in...
IDEAL DESTINATIONS

5 SOUTH AMERICAN ADVENTURES THAT WILL LEAVE YOU BREATHLESS

Ideal for exploring some of the continent’s most beautiful spots. From the Amazoinian rainforest...
IDEAL DESTINATIONS

Or were the movies inspired by the holiday destinations? It’s a chicken or egg situation we’re keen...
FEATURED

HOTEL REVIEW: JULES ET JIM – THE IDEAL PLACE FOR A...

For those in thrall to the seductive pull of Paris, a warning; not every love story has a happy ending. For every snatched kiss...
COLLABORATIVE POST

HOTEL REVIEW: VIC3 BANGKOK – THE IDEAL PLACE FOR AN AFFORDABLE...

Once unheard of, then Bangkok’s best-kept secret, but now with the cat truly out the bag; Ari is the Thai capital’s hippest ‘hood.  Perfectly...
IDEAL DESTINATIONS

Ideal for making the most out of your trip to Monaco and Monte Carlo.

6 WAYS TO TAKE CONTROL OF YOUR HEALTH

5 TIPS FOR SLEEPING BETTER DURING DURING UNCERTAIN TIMES

HOW TO HANDLE BACK TO WORK ANXIETY: 5 IDEAL STEPS

HOW TO PREVENT DEHYDRATION DURING AUSTRALIA’S SCORCHING SUMMER SEASON

5 TIPS FOR LIVING WITH OLDER RELATIVES

AUTUMN LAWN CARE: 5 TIPS ON HOW TO MAINTAIN YOUR LAWN